Putting together the first ever Game Dev Heroes awards event was a daunting task. There are so many people doing great work behind the scenes of the games industry that there’s always so much more that can be done to recognise them & show our appreciation. Our little part in showing that appreciation took place last month in Brighton, packing out the room with over a hundred talented people from across all areas of game development.

We’re here in Brighton for the final reveal of our inaugural #gamedevheroes 💚
In just a couple of hours we’ll be presenting awards to those who have most inspired & supported others.
Check out the full list of those up for awards : https://t.co/HHBWsRHrvu pic.twitter.com/WCXEa8Hpzq

All set & excited for the awards this evening! 🏆🏆🏆#GameDevHeroes pic.twitter.com/rXdNd5lnBi

Our first Game Dev Hero of evening is Anna Hollinrake of Dream Reality Interactive, picking up the award for the art category! 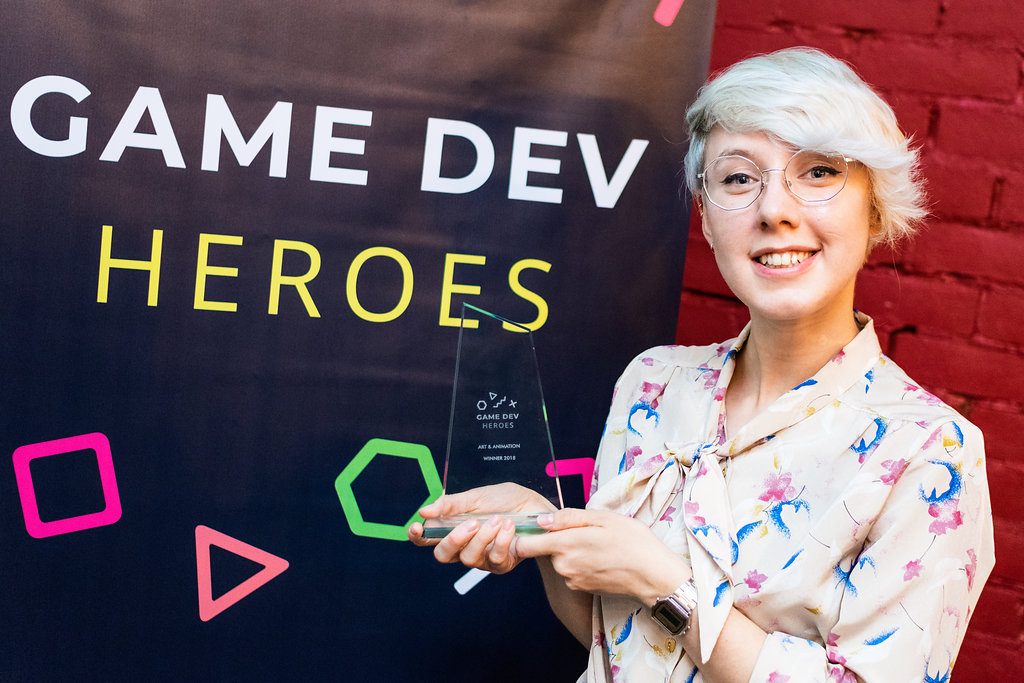 Recognised both for her professional work & as an advocate for mental health awareness and industry inclusion, Anna is an excellent role model for artists in the games industry.
“Again and again, Anna has pushed the limits of visual story telling for her professional and personal work… Anna always adds her own personal flair and unique taste to everything she touches.”

We’re very proud to say that our next hero is Meg Jayanth, one of the most notable writers in games & the award-winning lead behind Inkle’s 80 Days. Meg’s writing is frequently cited as inspirational & influential to many, showcasing the high levels that can be achieved with story-based and narrative led games.

Thank you so much @GameDevHeroes – I’m completely honoured and delighted and blown away. And congrats to all the @GameDevHeroes winners and finalists. https://t.co/ur8aY0ClEk

Being able to include an award category for QA was something we were passionate about from the start, and we’re delighted to see Lesleyann recognised as a Game Dev Hero in the field, with the award presented by Jamie Clarke from Games Jobs Direct. 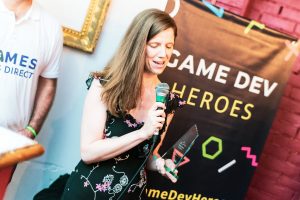 Praised heavily across both professional and personal qualities, Lesleyann’s described as bringing “an amazing level of thoroughness and quality” and “a fantastic colleague and an incredibly caring and considerate individual”.

Honoured to have won the @GameDevHeroes award for QA. It’s still not sunk in yet, but it means the fucking world to have been recognised for what I do. Thank you to those who nominated me and to everyone who has supported me over the years, especially my boy @TimAlanWhite https://t.co/rRMyJ80ANg

Sam’s become a recognised name across game audio, largely in his extensive work to bring awareness & give platforms to the work and voices of other people. It seems only fitting that Sam himself is our Game Dev Hero for Sound, recognising the value that his contributions and advocacy have brought both to the game audio sector and the industry at large.

Sam’s currently interning with Remedy Entertainment in Finland, but happily we had Alyx Jones, Head Writer for The Sound Architect accepting the award on Sam’s behalf.

Huge congratulations to our founder @samhughes88 LOOK AT THE SHINY AWARD! I picked this up on his behalf at the @GameDevHeroes awards!
Sam works so hard to champion all the less recognised work of #gameaudio people and to create community, he so deserves this and more 💙💚💜 pic.twitter.com/h8oEiZxKRe

WOW I WON!
I can’t believe it 😮. Thank you so much, you have no idea how much this means to me! I really am grateful for #gameaudio and the community and the teams I work with at GAN & The Sound Architect. You rock!

I’m super hyped and gonna celebrate for sure! Thanks again 😊! https://t.co/VI9qXaBKme

Jess is our Game Dev Hero Producer, with a hugely positive reception for her extensive work behind the scenes at Sumo Digital!

A pivotal member of the development team at Sumo that truly understands the value of individuals both as professionals and as people, Jess is cited both as “The best boss I have ever had” & “a catalyst for success, a production powerhouse, and long overdue for the recognition she deserves.”

Yeeees! A major congratulation to our own Jessica Gaskell who has just won the #GameDevHeroes award for production!

We’re all incredibly proud of you, Jess! https://t.co/rH6vEa5n8f

With an excellent intro that almost created the first Game Dev Villain, Nick Dixon from Launchpad Falmouth presented the award to John of Triangular Pixels who, in perfect Game Dev Heroes style, is described as “always busy behind the scenes creating excellent gameplay that whole studios get the credit for” 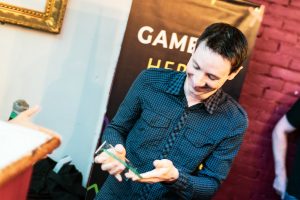 John’s known for being a positive force across development, always actively working to help improve experiences both for the studio and the players, as well as helping out others by sharing his knowledge and experience.

Picking up a second award of the night for the Failbetter Games team was Haley, our Game Dev Hero for marketing! 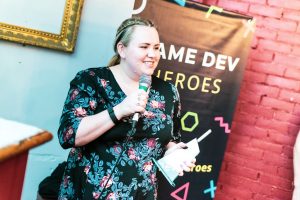 With excellent work as Failbetter’s marketing manager, Haley is also a strong advocate & promoter for more awareness of the value that marketing brings to games. Between talks, articles and great advice, Haley’s guidance can be invaluable both to fledgling studios and for those looking for role models in games marketing.

Incredibly proud to see both @Fuzzlette and @Absintheuse recognised as @GameDevHeroes for 2018! We’re getting some capes sized as we speak https://t.co/ic7FmDM2Qx 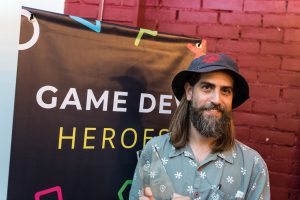 Thad’s an excellent role model for improving the inclusion, mentoring and empowerment of teams & individuals, with particular note to those just starting out on their careers in games. It’s no surprise that “Colleagues from previous studios across his career now have whole careers of their own founded on Thad’s belief in their potential”.

Bill’s R&D work for SpecialEffect over the past 11 years has resulted in genuinely life-changing experiences for so many people. With recent projects including both the EyeMine software and work on the XBox Adaptive Controller, he’s helped empower and enable disabled gamers across the world. A true Unsung Hero, “Bill’s imagination, creativity and drive have been at the heart of SpecialEffect’s technical achievements”.

Congratulations to our very own Bill Donegan who has won the @GameDevHeroes unsung hero award! 🎊🎉 #Developconf pic.twitter.com/ZyWONY7PKK

Presented by Ed Perkins from Square Enix, our Diversity Champion is Helen Andrzejowska, founder of Ocean Spark Studios, a studio with the aim of increasing the amount of women working within the industry. 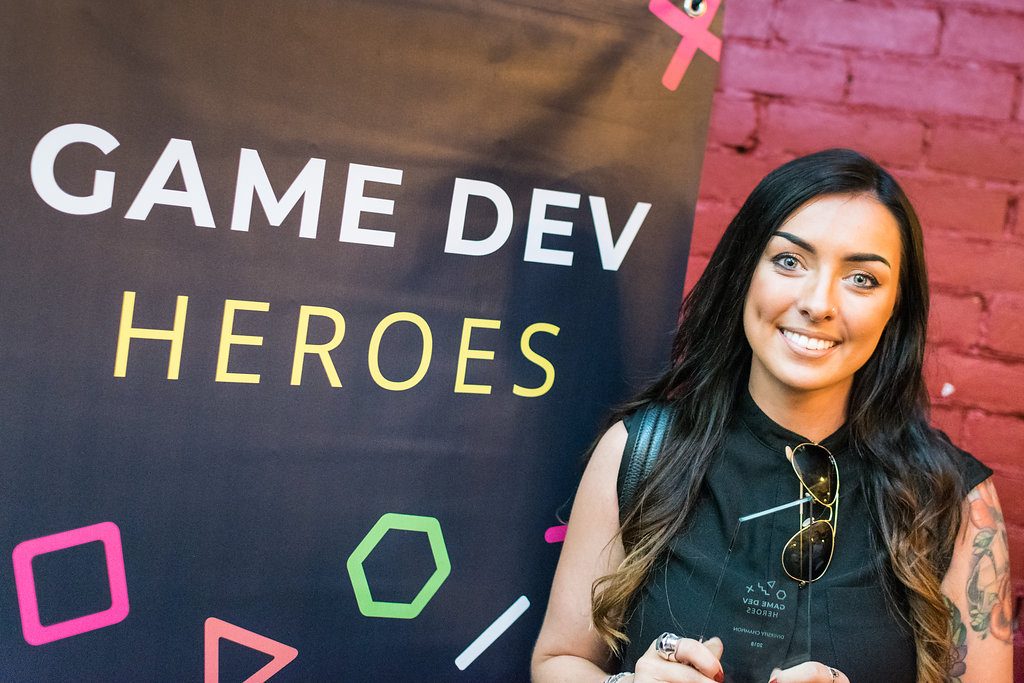 Helen is a passionate advocate for diversity & equality within the industry, delivering workshops at schools and colleges in an effort to tackle the issue early on in the education system. Helen “constantly goes above and beyond to inspire and enthuse girls to consider a career in games.”

Our very own @J0Wska has won the ‘Diversity Champion’ award at @GameDevHeroes and we couldn’t be more proud. Lets see more diversity and equality within our industry. We encourage all of you to help support getting girls in to our industry.. because it’s an awesome place to be! pic.twitter.com/Wf86XiTasg

With 17 years at the head of Creative Assembly, Mike’s been a driving force behind both the studio and the Total War franchise. You can read all about Mike’s work and the Outstanding Contribution award here. 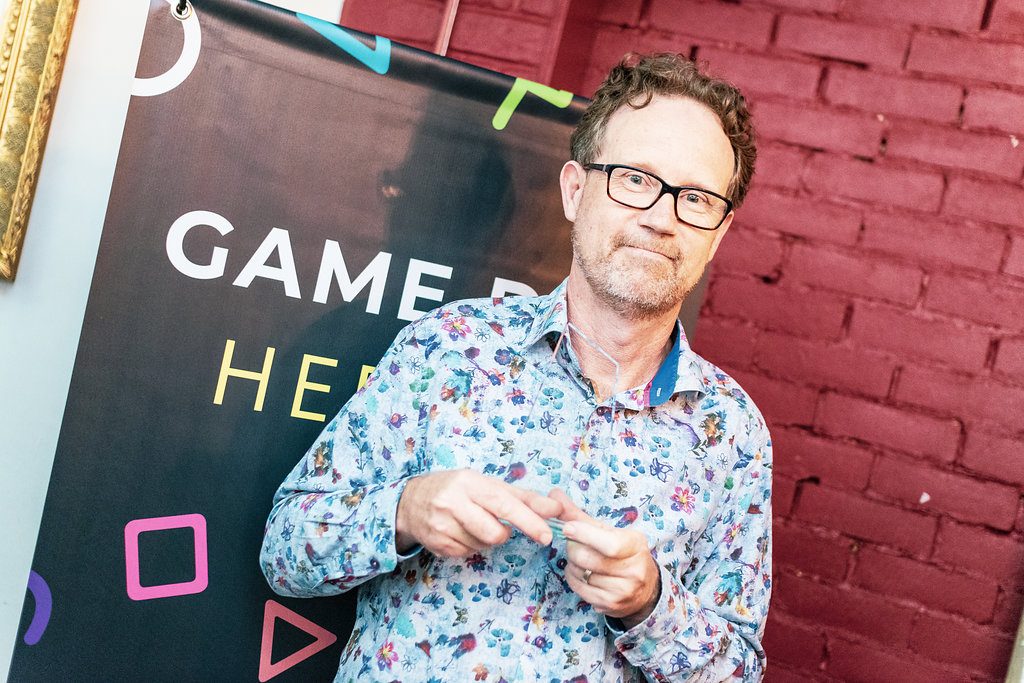 Really happy to see several Grads In Games contributors shortlisted for #GameDevHeroes & super proud of @codemonkey_uk in picking up an award!https://t.co/5O8e2GDGxw pic.twitter.com/y4VEHIGTsC

It was incredible to see so much unsung talent getting noticed and appreciated. Reading out the nominations that people wrote about them was a brilliant touch 🙂 Fingers crossed that GDH grows and grows…

Visit our Facebook gallery for more images from the event (and tag yourself up if you were there!)

A huge thanks to our partners and supporters, without whom we wouldn’t have been able to do it – Aardvark Swift, Games Jobs Direct, Mimram Media, Square Enix, Launchpad Falmouth & Analog

Thank you to all of the Game Dev Heroes who came along to make it a memorable evening – we look forward to seeing you again soon!

Awards coordinator, doing many things behind the scenes.